Dordt in steam in May 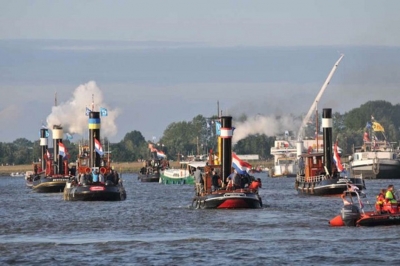 "Dordt in Stoom" (Dordt in steam) in the town of Dordrecht in Holland is one of the most important steam events in Europa. Until 2016 this yearly happening has been organized 17 times. The attraction draws a vast public, some 250.000 visitors. During this event many steam ships, steam engines and steam tools are to be seen. Steam ships make tours on the river. For the children there are miniature steam trains. Many of the ships are open to visit. In Dordrecht, the eldest town of the Netherlands, often referred to as "Dordt", crowded streets and terraces with music create an atmosphere of sparkling cosiness. On Friday evening, between 20.00 and 21.30 uur, on the quay of the river Merwede (called Groothoofd) an enormous steam whistle concert takes place. At the Grevelingenweg, close by nature park The Dutch Biesbosch, you can visit a large model building show. Participating hobbyists from Holland and abroad show their model railways, miniature steam engines end model ships. The Foundation Tug Harbour Maassluis, in which the Nationaal Dutch Towage Museum is participating, is also present at "Dordt in Steam" with historical ships and a promotion and information stand.