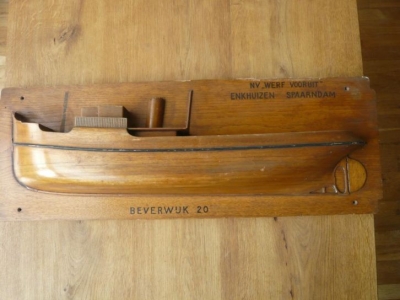 The Dutch National Towage Museum in Maassluis recently received a gift of the half model of the tug BEVERWIJK 20. The tug was built by Werf Vooruit, Enkhuizen (Netherlands) as yard number 129. The tug was ordered by C. Stapel (Enkhuizen) and named KEES, however already during the construction she was sold to NV Hollandsche Mij. voor Aannemingen at Beverwijk (Netherlands) and delivered to Sleepboot Maatschappij Beverwijk NV (Van Hattum) at Beverwijk and renamed BEVERWIJK 20. As from April till June 1938 she was given in charter to L. Smit & Co's Internationale Sleepdienst Maatschappij at Rotterdam. In 1939 she was sold to Sovtorgflot, Murmansk (Russia) and renamed B 20. By mistake in 1943 the B 20 was torpedoed by US Navy sub 'PERMIT', near the island Todoshima in Japan. She had a triple expansion J & K Smit's Machinefabriek steam engine with an output of 750 ihp. Her length was 37.80 mtrs, a beam of 8.03 mtrs and a depth of 4.21 mtrs. Her size was 330 grt and 3 nrt. The Dutch National Towage Museum thanks Jos Haver for this gift.
(Photo: Hans de Klerk, Dutch National Towage Museum) 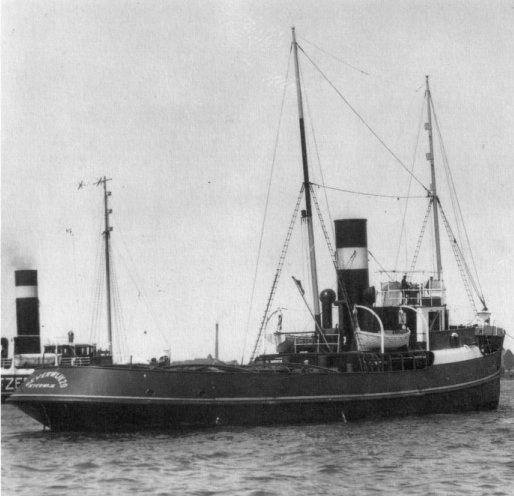 Stated below are the technical and historical data of the tug BEVERWIJK 20 (according to The Tugslist Van Damme):

The tug BEVERWIJK 20 was built in 1921 under the name KEES with yard number 129 at the "Werf Vooruit" at Enkhuizen (The Netherlands). She was ordered by mr. C. Stapel at Enkhuizen.
During construction she was sold on December 31st 1920 to "NV Hollandsche Mij voor Aannemingen" at Beverwijk (The Netherlands). She was registered under the Dutch flag with brand mark 853 Haarlem 1920.
Her size was 330 grt and 3 nrt. Her dimensions were: length 37,80m (35,53m), beam 8,03m, draught 3,89m and depth 4,21m (116.7' x 26.4' x 12.9').
Her propulsion system existed of one ordinary conventional fixed propeller, driven by a Triple expansion 3-cylinder steam engine from "J. & K. Smit's Machinefabriek" (boiler "Kinderdijk" nr.594), producing a power of 117 nhp (750 ihp).
In January 1921 she was delivered to owner "Sleepboot Maatschappij Beverwijk NV" (management M.J. van Hattum) at Beverwijk, and renamed BEVERWIJK 20. She remained under the Dutch flag and was registered at Beverwijk with brand mark 396 Z Haarlem 1932 and IVR number 30.20396. Her callsign was NDCB. Subsequent call signs were: NHBF and PDBT (1934).
Later the name of the management company changed in "Van Hattum & Blankevoort", also established at Beverwijk.
From April till June 1938 the BEVERWIJK 20 was chartered to "L. Smit & Co's Internationale Sleepdienst Maatschappij" at Rotterdam.
On October 30th she was sold to "Sovtorgflot" at Murmansk (Russia), and renamed B 20. She was registered at Murmansk under Russian flag. Possibly she belonged to one of the secret organizations EPRON or NKPD, whose ships did not figure on the USSR lists.
On July 9th 1943 the B 20 was torpedoed by mistake by the US Navy submarine 'PERMIT', near the island Todoshima (Japan).
The tug was registered in Lloyd's Register as: LR43-44:05474 /LR47-48:05158 /LR50-51:53266.