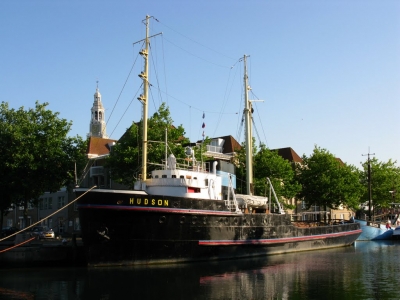 On November 19th, 2014 it is exactly 25 years ago that the "Stichting Help de Hudson" (Foundation "Help the Hudson") was established by a limited number of volunteers. They were of opinion that the tug was a monument in towage history, especially with a view to her great merits during the Second World War. The owners of that time had just sold the ship to the breakers and the Hudson would have become razorblades if the volunteers had not taken the initiative for preservation. M/T Hudson, built for account of L. Smit & Co's Internationale Sleepdienst in 1939, headed for sea on  April 16th, 1940. No one could foresee that she was to remain outside her home country for more than five years. Having a modest 600 hp in her engineroom she was assigned to the British Ministry of War Transport during that dark period. Some striking salvages were performed during wartime. I.e. a blazing ammunition ship was towed out of the Algers harbour in order to prevent desastrous explosions. By the end of 1945 the ship returned in her homeport Maassluis and was handed over to her owners. Under the name of Hudson the small but courageous tug performed many voyages and salvages all over the world until 1962. When a brandnew and much stronger Hudson was built the old Hudson was renamed Ebro. She kept on towing for another year. However, in 1963 her career seemed to be over. The ship was sold to be broken up. However, surprisingly she escaped this fate. A fisherman's trading company at Stellendam, Netherlands purchased the tug and converted her into a factory for chip-ice in order to be of service for the local fishing industry. The engine was removed and the void room was isolated with lots of wood and tempex in order to produce the ice under almost ideal circumstances. Under the name of Johan-Dirk the former Hudson continued her existence, simply by being moored in the harbour of Stellendam. After some 25 years also this career came to an end, because by that time sufficient ice was produced on board of the fishing vessels themselves. For the second time the ship was sold to be scrapped. The volunteers thought this was a bad idea and took the initiative for talks with the owner of the scrapyard. The good idea was to preserve the ship and rebuild her into a well-equipped museum. It was quite a task to collect the money needed for buying the former tug and luckily the scrapyard allowed some extra time for that purpose. Once the ship was owned by the meanwhile established foundation "Help the 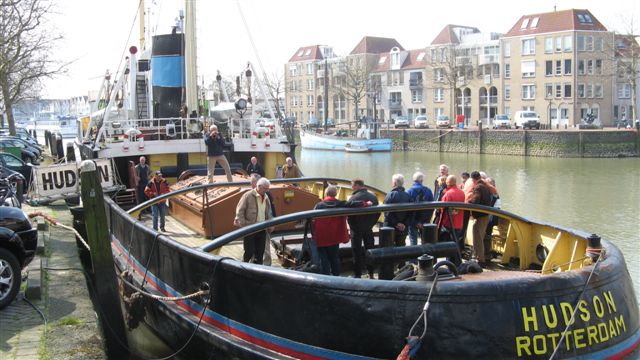 Hudson" it turned out that converting her into her original appearance and at the same time make her a museum in memory of the Dutch mercantile marine during the Second World War was not that easy. After many years of raising funds, hard work and creative labour of some 40 volunteers the Hudson is now lying in Maassluis, close to the National Towage Museum. In the ship itself everyday life on board of such a small vessel is presented in a most instructive way. Nowadays it is almost unbelievable that during a five years period about 20 sailors lived and worked together under sometimes extremely stressful circumstances. The atmosphere of 70 years ago is almost sensible. Together with the volunteers the board of the foundation that succeeded in realizing the restoration- and museumplans can be justifiably proud of what has been achieved. I sincerely do wish that the flag will be at full mast for many years to come.
(source: Hans van der Ster)