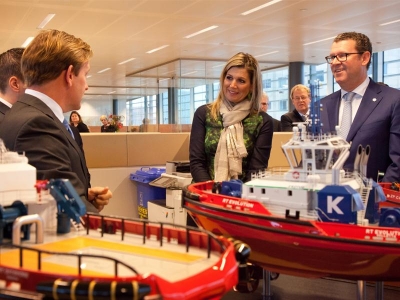 Wednesday 3rd December 2014, Her Royal Highness Queen Máxima of The Netherlands visited international towage operator KOTUG in Rotterdam. May 13th 2014, the King Willem I Award was presented to KOTUG by Queen Máxima, honorary President of the King Willem I Foundation.
The Queen's visit began with a sailing trip on KOTUG's newest tugboat RT EVOLUTION. This Rotortug is equipped with hybrid technology; electrical energy storage permits the tug to sail in noiseless zero emission mode with no diesel engines running. During the trip the crews explained the innovative technology of RT Evolution. Queen Máxima also visited the new Rotortug-simulator at the STC-Group, an education and knowledge institute for the shipping, transport and port industries. This simulator will be used by KOTUG to train its crews in operating the Rotortug and to educate new captains. Queen Máxima spoke with two participants about the personalized interactive training program.
Thereafter Queen Máxima visited KOTUG's Head Quarters. The Queen was given a tour of the office and spoke with employees about the history of KOTUG, the developments of the tugs, economic movements in the European Ports and their efforts to continue the worldwide growth of the company. The visit concluded with a discussion with delegates of KOTUG, the Port of Rotterdam, the Broekman Group and the STC-Group about the theme 'The Rotterdam Harbour in an international perspective; opportunities and threats". 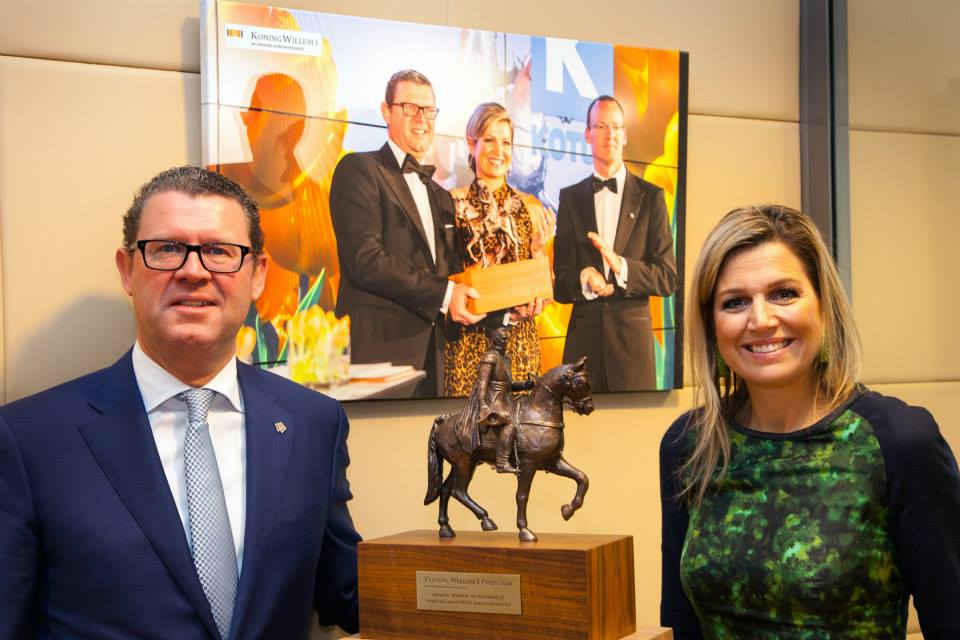 The King Willem I Award is seen as the Oscar for business owners in the Netherlands. The King Willem I Prize has been awarded every two years since 1958 by the King Willem I Foundation, with active support from the Ministry of Economic Affairs. The Foundation's mission is to provide new impulses to the national economy, thereby promoting the standing of Dutch trade and industry. The award goes to companies that have demonstrated their ability to successfully combine daring, decisiveness, sustainability, perseverance and innovation.
(source: KOTUG)