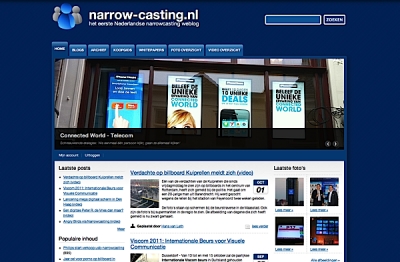 In the Wedding Hall of the National Dutch Towage Museum the visitor will find a narrow casting system. We implemented this digital information system In cooperation with Royal Dirkzwager, a ship information supplier in Maassluis. On a special screen one can enjoy a continuous stream of actual news, messages and interesting short videos. It is a rather new phenomenon and very much a success. Narrow casting will soon be spread widely among businesses, governmental organizations, public transport, museums and so on.

Narrowcasting has traditionally been understood as the dissemination of information (usually via Internet, radio, or television) to a narrow audience; not to the broader public at-large. Also called niche marketing or target marketing, narrowcasting involves aiming media messages at specific segments of the public defined by values, preferences, demographic attributes, and/or subscription. Narrowcasting is based on the postmodern idea that mass audiences do not exist. While the first uses of the term appeared within the context of subscription radio programs in the late 1940s, the term first entered the common lexicon due to computer scientist and public broadcasting advocate J. C. R. Licklider, who in a 1967 report envisioned:

"a multiplicity of television networks aimed at serving the needs of smaller, specialized audiences. 'Here,' stated Licklider, 'I should like to coin the term "narrowcasting," using it to emphasize the rejection or dissolution of the constraints imposed by commitment to a monolithic mass-appeal, broadcast approach.' "

The term "narrowcasting" can also apply to the spread of information to an audience (private or public) which is by nature geographically limited - a group such as office employees, military troops, or conference attendees - and requires a localized dissemination of information from a shared source.

Marketing experts are often interested in narrowcast media as a commercial advertising tool, since access to such content implies exposure to a specific and clearly defined prospective consumer audience. The theory being that, by identifying particular demographics viewing such programmes, advertisers can better target their markets. Pre-recorded television programmes are often broadcast to captive audiences in taxi cabs, buses, elevators and queues (such as at branches of the Post Office in the United Kingdom). For instance, the Cabvision network in London's black cabs shows limited pre-recorded television programmes interspersed with targeted advertising to taxicab passengers.Television has made a transition from broadcasting to narrowcasting which has given advertisers a greater advantage when it comes to directing their messages to a specific demographic audience. For example if the energy drink company Red Bull wanted to target 18-25 year old action sport athletes, they are able to purchase commercial time on a niche network such as Fuel TV who only narrowcasts the UFC, thus making their message more valuable by marketing to a concentrated audience.

The Internet uses both a broadcast and a narrowcast model. Most websites are on a broadcast model since anyone with Internet access can view the sites (Wikipedia is a good example, this website can be received by anyone with an internet connection). However, sites that require one to log-in before viewing content are based more on the narrowcast model. Push technologies which send information to subscribers are another form for narrowcasting. Perhaps the best example of narrowcasting are electronic mailing lists where messages are sent only to individuals who subscribe to the list.

Narrowcasting is also sometimes applied to podcasting, since the audience for a podcast is often specific and sharply defined. Dr. Jonathan Sterne of McGill University stated, "Narrowcasting is a form of broadcasting, if the latter term is understood as the 'wide dissemination of content through mechanical or electronic media'." Other one-way, traditional media approaches to narrowcasting, such as Internet Talk Radio, can be contrasted with broadcast radio programs. Narrowcasting approaches are focused on a specific (narrow) topic, whereas broadcast programs have a wider coverage of broad topics.

User-driven content also provides an excellent medium for narrowcast marketing, provided the correct product is matched with the appropriate medium.

These systems enable brands to communicate with their customers via a personal computer. The advantage of the majority of interactive narrowcasting projects is that they are more effective and less costly over time.